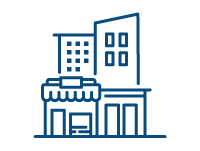 Key proposed changes for commercial development include the following:

Zoning Bylaw No. 55 was adopted by Council on November 2, 2021. Consultation on this project has concluded.