Question of the Week - Updated Weekly 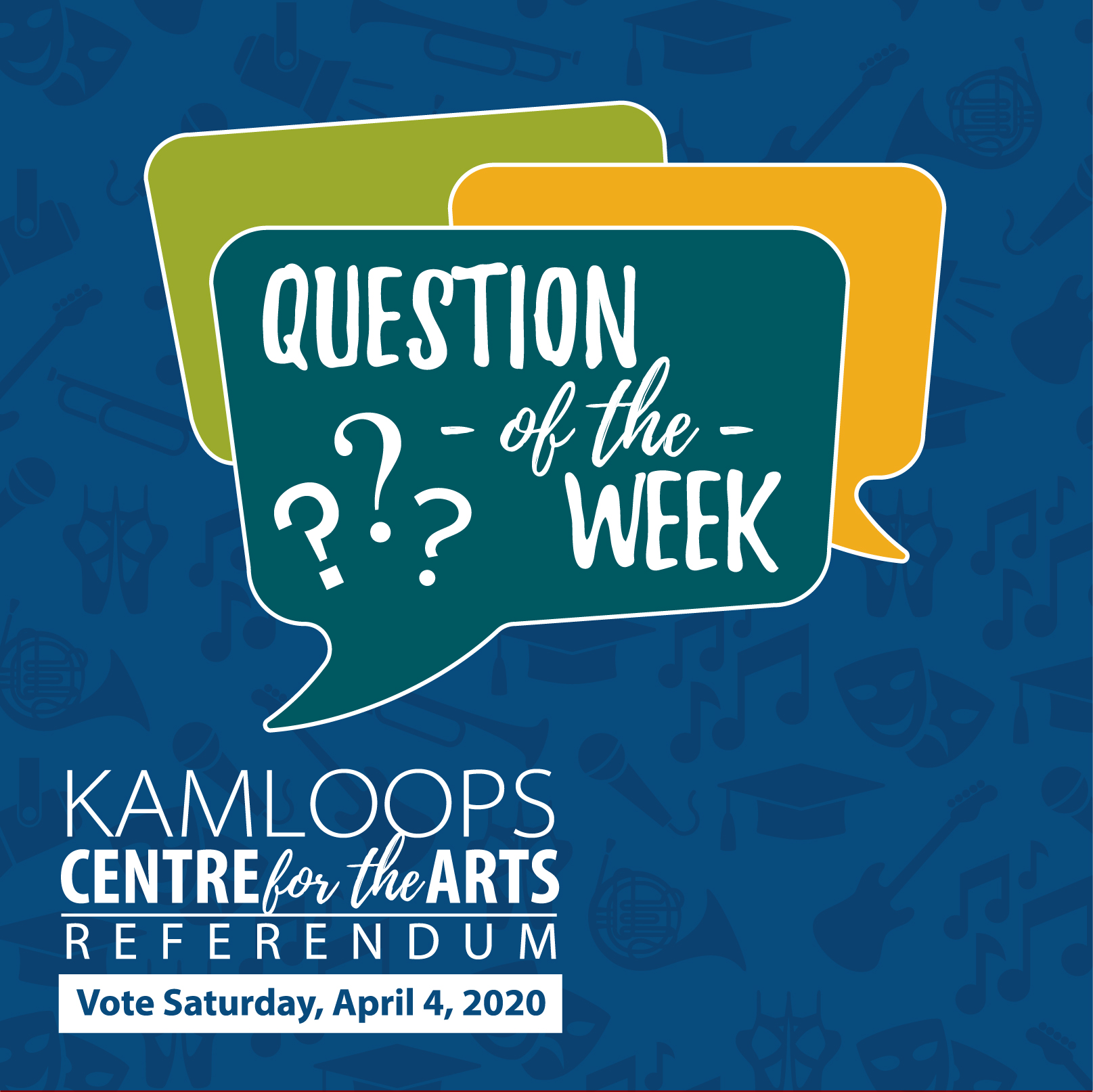 The City is reaching out to the community asking for residents to submit their questions related to the Kamloops Centre for the Arts (KCA) project and the referendum process.

We have been collecting these questions through various methods: online, through in-person conversations, and at public meetings. As answers become available, we will be updating the Q&A section on the Let’s Talk website. To highlight some of the questions and answers in the Q&A, we will be issuing a regular “Question of the Week” feature via social media and on the City’s Let’s Talk website.

We encourage you to share the information with those who are interested in learning more about the KCA project and the referendum process.

Question of the Week - March 9

A: You can vote at any of the 16 voting locations on Saturday, April 4. Two pieces of ID are required to vote.

Question of the Week - March 2

Q: What happens if the Kamloops Centre for the Arts $22 million fundraising is not met or if the project goes over budget?

A: Funding would need to come from other levels of government, grants, donors, or other City sources, such as reserves. Before construction proceeds, if the money objective has not been met, project scope, timing, and/or finishings may be reviewed. The project may not proceed unless other sources of funding are secured. The referendum has set the maximum amount the City can borrow for the project at $45 million.

Question of the Week - February 28

Q: Why did Council choose to hold a referendum?

The City has two options to seek the approval of the electors—through assent voting (referendum) or through the alternative approval process (counter-petition).
Council felt a referendum would be the most transparent way to engage the community and determine whether the community will support the proposed project as it weighs the overall number of “yes” and “no” votes, whereas a counter-petition only gauges the “no” votes.

Question of the Week - February 19

Q: Why should taxpayers fund this? Shouldn’t the user groups pay for it?
A: Taxpayers in Kamloops support all of our City-owned venues, including arenas, pools, sports fields, and parks. As a community, we embrace and support the diverse interests that make our city liveable for all. While this venue will provide an opportunity for those interested in the arts, it is also well-recognized in the business case that it will be used for many community events that are not specifically connected to cultural user groups.
The 2019-2022 Council Strategic Plan identifies livability as one of the four strategic priorities, stating that the City of Kamloops maintains a vibrant, high quality of life for an inclusive, healthy, and diverse community.

Question of the Week - February 7

Q: What other venues in Kamloops exist because of a ‘yes’ vote in a referendum?
A: Sandman Centre, McArthur Island Sport and Event Centre, Tournament Capital Centre, and Riverside Park all exist due to referendums.

Question of the Week - January 31

A: Residents unable to vote on April 4 are encouraged to vote during one of two advanced polling dates at Heritage House, Wednesday, March 25 and Wednesday, April 1. Individuals who expect to be absent from the City during the general and advance voting dates, or those who have a physical disability, illness, or injury that prevents them from voting at another voting opportunity, can submit an application to vote by mail online (Kamloops.ca/Referendum) or through City Hall.

Question of the Week - January 24

A: We acknowledge that residents in the Thompson Nicola Regional District (TNRD) and within the Tk’emlúps te Secwépemc (TteS) membership may wish to exercise their right to vote in the City’s upcoming referendum. Members of TteS and residents who live within the TNRD boundaries are unfortunately not eligible to vote in the upcoming referendum, this includes areas such as Sun Rivers, Rivershore, Tobiano, and Sun Peaks. However, residents who reside in these areas may vote if they own real estate in Kamloops, registered in their name for at least thirty days prior to the day of voting. These requirements are dictated by the Local Government Act and Elections BC. As a municipality, the City is bound to follow the requirements when conducting an election or a referendum.

Question of the Week - January 17

Q: Have other locations been considered for the Kamloops Centre for the Arts?

A: We recognize that some residents would like to see a venue of this nature in other areas of town; however, the location for the Kamloops Centre for the Arts is final. The downtown property is owned by the City and is ready for development.

In order to allow access for all residents and provide the greatest economic opportunity from this investment, a major community venue such as the Kamloops Centre for the Arts must be built in the downtown core.

When the City created the current surface parking lot, it was developed with the intention of future development. With the addition of the Kamloops Centre for the Arts, Kamloops would have the Kamloops Symphony, Western Canada Theatre, the Kamloops Film Society, the Kamloops Art Gallery, and the Kamloops Museum & Archives all within three blocks of each other, which would create a cultural destination in our downtown core for both residents and tourists to enjoy.

Question of the Week - January 10

Q: What is the total cost for this project, and how will it be funded?

A: The Class D estimate indicates the facility will cost approximately $70 million, of which the City is proposing to borrow up to $45 million for its contribution.

This balance of the project will be funded through grants from other levels of governments, donations and sponsorships from organizations and individuals, and a substantial financial gift from Ron Fawcett.